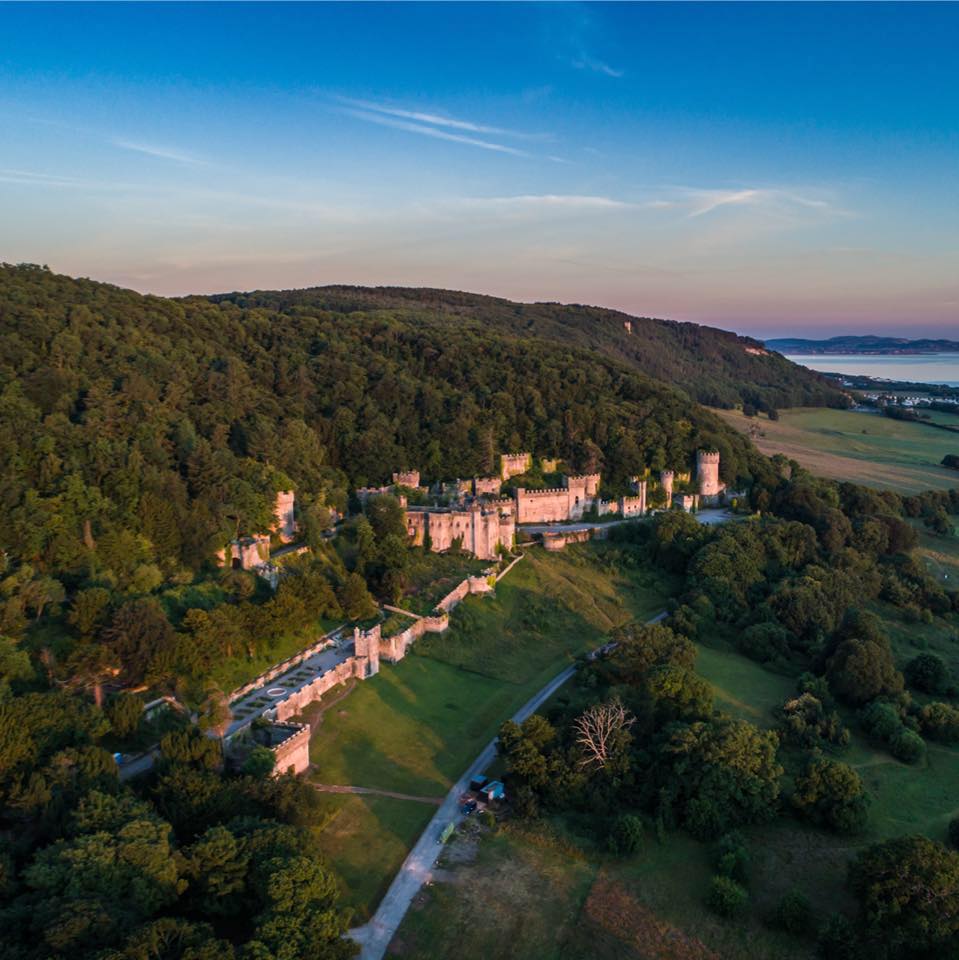 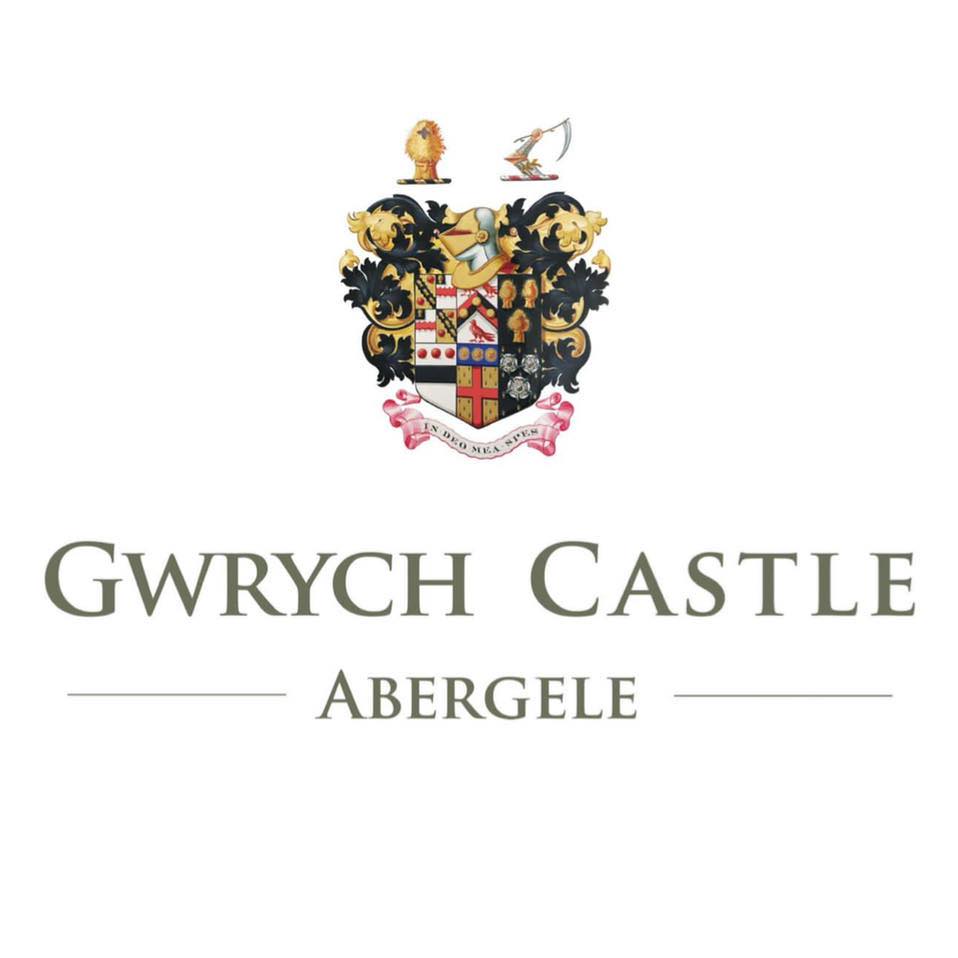 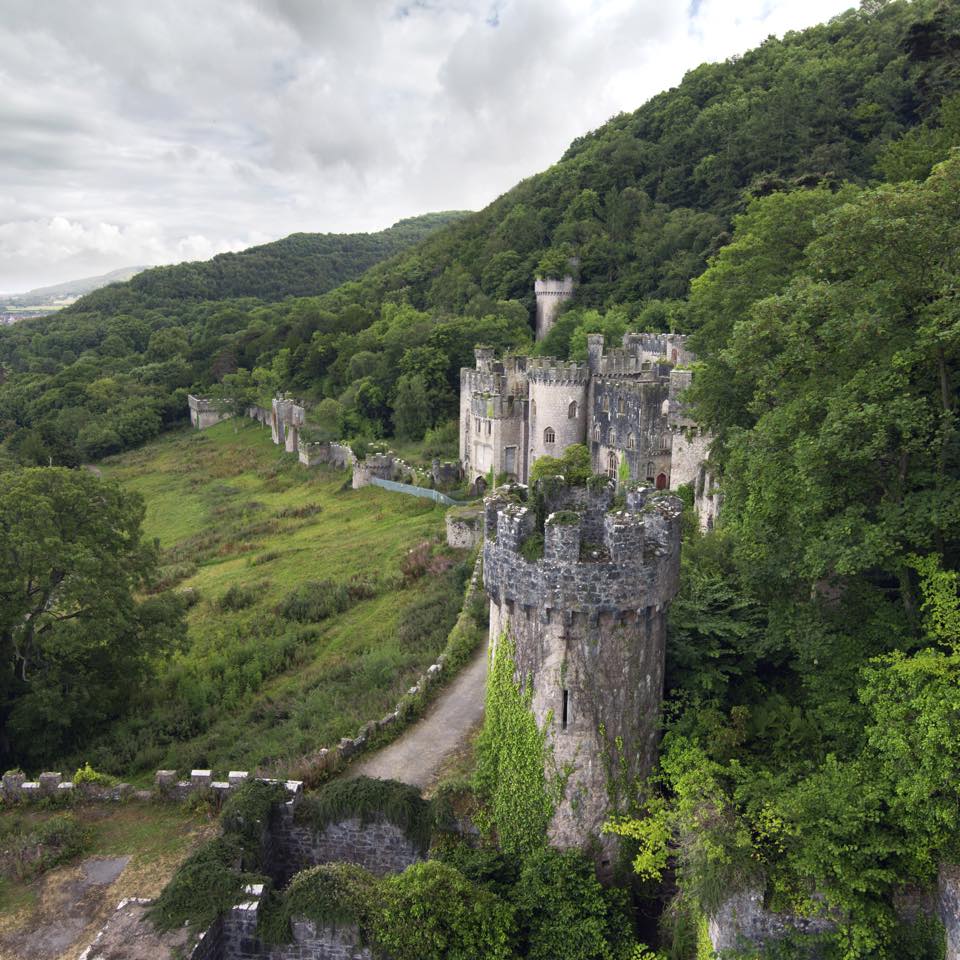 Gwrych Castle is a Grade I listed country house in North Wales, one of the first attempts at replicating true medieval architecture in Europe. It stands in 250 acres of gardens and grounds and has extensive views over former parkland including a deer park and the Irish Sea.

Gwrych Castle was built between 1812 and 1822 by Lloyd Hesketh Bamford-Hesketh as a memorial to his mother’s ancestors, the Lloyds of Gwrych. Upon the site was an Elizabethan house named ‘Y Fron (rounded hill) which by 1810 had fallen into dereliction. When Lloyd married Lady Emily Esther Ann Lygon, daughter of the 1st Earl of Beauchamp in 1825, the main building was complete. Many important architects and designers are associated with the castle and estate. For example, the expertise of Charles Augustus Busby and Thomas Rickman was utilised by Hesketh in the overall design of Gwrych, and in particular the cast iron windows. Henry Kennedy was employed to extend the Castle during the 1840’s by the inclusion of a new bedroom wing, staircase and porch whilst George Bullock and the Craces furnished the interiors. When Lloyd died the Castle passed onto Robert Bamford-Hesketh and his wife, Ellen Jones-Bateman. George Edmund Street designed the family’s chapel during the 1870’s and also several churches and schools for the Hesketh family. Robert and Ellen planted much of the present gardens with their enormous Monkey Puzzles and Yew trees. Gwrych Castle was built by Lloyd Hesketh Bamford Hesketh, heir of the Lloyds of Gwrych, from c.1810, incorporating his family’s ancestral home, with the work continuing over four decades. The castle then passed to the Earls of Dundonald by marriage to the Bamford Hesketh heiress, Winifred. During World War II the castle was requisitioned as part of Operation Kindertransport and in 1946 was sold by the Dundonald family, ending nearly 1000 years of continuous family ownership. In 1948, the castle was purchased by Leslie Salts who opened it as the ‘Showplace of Wales’ for a period of twenty years. Following Salt’s sale in 1968, the castle was operated as a medieval entertainment centre with jousting, banquets and markets taking place in the grounds. This also heralded a period of slow decline which saw the building shut to the public in 1985 and the final joust taking place in 1987. In 1990, an American property purchased the estate with a view for creating an opera centre and hotel – nothing materialised. Instead, the castle was asset-stripped and vandalised to the point that its very future was uncertain.

In 2018, the castle and estate was purchased by Gwrych Castle Preservation Trust, on behalf of the nation. Work is underway to restore the castle and estate, as well as providing a UK home to I’m A Celebrity… Get Me Out of Here! during the COVID-19 pandemic in 2020 and 2021.